Article 2 of the Constitution states, "The religion of the State is Islam, and the Islamic Sharia shall be one of the main source of legislation." The vast majority of Kuwaitis are Muslim. Article 35 of the Constitution states that "Freedom of belief is absolute. The State protects the freedom of practicing religion in accordance with established customs, provided that it does not conflict with public policy or morals." The Ministry of Awqaf and Islamic Affairs has the responsibility of maintaining the spiritual and religious aspects and preserve the Islamic heritage.

Due to its geographical location, Kuwait is considered an outlet to the Northeast of the Arabian Peninsula.

The border's length is about 685 Kilometers (426 Miles), 195 Kilometers of which (121 Miles) are sea borders over looking the Gulf to the East. It shares about 250 Kilometers (155 Miles) borders with the Kingdom of Saudi Arabia to the South and West, and about 240 Kilometers (149 Miles) with the Republic of Iraq, to the North and West.

As Kuwait lies between latitudes of 28.45 and 30.05 degrees North of the Equator, and longitudes 46.30 and 48.30 degrees East of Greenwich, it has a continental climate, which characterizes all desert geographic regions in general. The total area of the State of Kuwait is 17.818 square kilometers (6960 square miles). 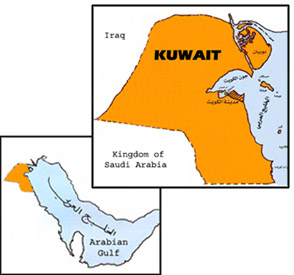 Due to the location of Kuwait in the Sahara geographical region, its weather is characterized with long, hot and dry summer, short, warm and sometimes rainy winter. Dust storms almost always occur during the year and humidity rises during summer.

The average temperatures range from 45 degrees in summer to an average of 8 degrees in winter. Such climate fluctuation is often accompanied by a change in the annual averages of rainfall, which ranges from 22 mm to 352 mm every year.

Kuwait has few natural resources other than oil, a gigantic natural harbour, fisheries, and a few sparse water supplies. Oil is Kuwait's prime natural resource on which its economy depends. The country is reckoned to have reserves of 94.8 billion barrels, about 9.6% of the world's total. This ranks it third in the world behind Saudi Arabia and Iraq. At current levels of production, Kuwait has enough oil to last for more than 100 years.