The unit of currency in Kuwait is the Kuwaiti Dinar (KD), divided into one thousand Fils. Currency notes are issued by the Central Bank of Kuwait in the following denominations: quarter Dinar, half Dinar, one Dinar, five Dinars, ten Dinars and twenty Dinars.

The first attempt to issue a national currency was during the reign of the fifth Amir of Kuwait, Sheikh Abdullah bin Sabah bin Jaber Al-Sabah. In order to reflect the independance of the State of Kuwait, Sheikh Abdullah ordered the coining of a national currency. The first coins were made using simple tools like hammers, hence, their shape was irregular and each coin was different than the other. The value of this currency equaled one paisa. After the circulation of only a few hundred pieces of this currency in the markets for few months, it was withdrawn for the following reasons:

·  During that period, Kuwait used the Rupee of Queen and Empress Victoria. Among its divisions was the paisa.

·  The Indian paisa had the greater share in the market, as result of India’s powerful gold reserve.

·  Kuwait had no gold reserve to foster its national currency. 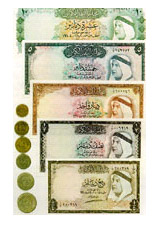 The issue and circulation of currency notes and coins is subject to the provisions of law (32) of 1968 concerning currency, the Central Bank of Kuwait (CBK) and the organization of the banking business in the country. Accordingly, the issuing of Kuwaiti currency is the State's exclusive privilege, solely exercised by CBK. There have been six issues of Kuwaiti currency notes since the introduction of the State's legal tender in 1961. The Kuwaiti banknotes issues are:

·  The fourth issue: Soon after liberation, the fourth issue was put into circulation on March 24th, 1991, so as to allow a speedy exchange of the withdrawn third issue and to ensure the country's swift economic recovery.

·  The fifth issue: Was placed into circulation effective April 3rd, 1994. The fifth Issue utilized high-level technology and technical features and security developments realized by the bank note printing industry at the time. The fifth issue of Kuwaiti banknotes has lost its status as legal tender by the end of banking business hours on Thursday 1-10-2015. Holders of the fifth issue banknotes shall still be able to exchange them at CBK Banking Hall within an extended period of 10 years from the effective date of the resolution dated 19-04-2015.

of nationally significant elements and economic accomplishments that are all grounded on one unified background that is of the Kuwaiti flag. The banknotes feature iconic and culturally significant buildings on the front while the backside illustrates Kuwait’s accomplishments and economic milestones throughout history. The new banknotes were also designed with the visually impaired in mind. The banknotes’ values are larger in size and the raised print aids the visually impaired in distinguishing each banknote from the other.The sixth issue of the Kuwaiti Dinar banknotes includes the most advanced security measures such as innovative printing processes, color changing features and visual elements that become visible upon tilting the banknote.

After independence, and to mark the achievements reached in the State of Kuwait in all aspects, the Central Bank of Kuwait issues gold, gold plated and silver Commemorative coins, and commemorative banknotes on different occasions to the public and currency collectors.