Kuwait Towers is a group of three slender towers that symbolizes Kuwait’s economic resurgence and also World cultural as well as touristic landmark. The structure is often referred to as Kuwait tower in singular although there are three towers. Standing on a promontory into the Arabian Gulf, Kuwait towers were officially inaugurated in 1979 and are rated as a tourist attraction and iconic building of modern Kuwait. 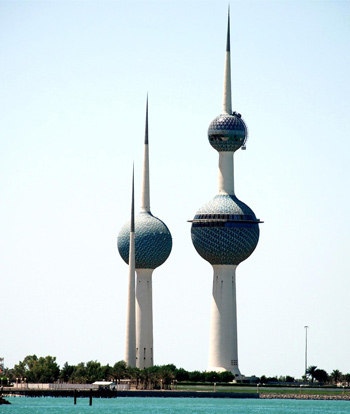 The Kuwait Towers delightfully suggest a combination of traditional Islamic design and modern architectural themes, with comparisons being made to blue-tiled mosques and slender minarets of Samarkand and Bukhara. The easy visibility and popularity of the towers with photographers is also due to the fact that there are no other high rise buildings in the general area of the Kuwait Towers. Ever since the official inauguration of the towers, they have come to signify the prosperity and opulence that has boosted this previously sleepy backwater country into the world’s tenth richest country per capita.
How to go?

Located in downtown Kuwait City, The Kuwait Towers (Burjan- Al- Kuwait) are on the seashore in Arabian Gulf Street of Sharq district.
History

The plan of constructing Kuwait Tower dates back to 1962, less than a year after Kuwait achieved its freedom from England. The design was done by Swedish architects Malene Björn and Sune Lindström of Vatten-Byggnadsbyzan (VBB) and this was officially approved in 1971. Belgrade-based contractor Union-Inzenjering was assigned with most of the structural work which was completed between1975 and 1976.

Seven months of Iraqi occupation which began on August 2nd, 1990, when Saddam Hussein of Iraq invaded Kuwait had left an ugly mark on Kuwait. Kuwait salvaged its sovereignty after a 100-hour ground campaign that began on February 25th. Saddam’s troops were guilty for sabotaging actions intended to wipe out all reminders of an independent Kuwait which also included the Kuwait Towers. Iraqi soldiers deliberately shattered the towers’ electrical utilities and wrecked interior facilities besides causing damage to the towers’ exteriors with gunfire and shrapnel.

The damage sustained to the Kuwait Towers (estimated to be 75 percent) was repaired throughout the balance of 1991 and well into 1992, and necessary technical as well as comfort facilities were restored to their original condition. The refurbishment cost was an estimated KD 2 million. On December 26th of 1992, it was an inspirational occasion for proud Kuwaiti citizens as the Kuwait Towers were officially reopened to the public by Nasser Al-Roudhan, Finance and Planning Minister at that time.
Design and Construction

Kuwait towers were built in March 1979 and comprises of an area of 38,000 m² with two major towers and a minor tower. The height of main tower is 187 meters (614 ft) and consists of the Ground Floor, Main Sphere and the Viewing Sphere. The main tower is also home to Kuwait Towers’ signature restaurants, cafés and reception halls; the lower sphere holds in its upper half a restaurant for 90 persons and in its bottom half a water tank of 4,500 cubic meters. Rising to 123 meters above the sea level, the viewing sphere completes a 360° turn every 30 minutes so that visitors can experience a panoramic view of Kuwait City, its fascinating vicinities and the tranquil blue waters of the Arabian Gulf within a glass enclosed pavilion. The Viewing Sphere's revolving platform provides an empowering view of Kuwait city, along with extra amenities like a quick snack cafeteria and a souvenir store.

The second tower serves as a water reservoir and is 147 meters high. The third tower houses equipment to illuminate the two larger towers and supply electricity for some areas in Kuwait City. The towers hold 10,000 cubic meters of water on the whole.

As part of a water distribution project, Kuwait Towers were designed by the Danish architect malene Bjorn and maintained by the Swedish engineering company VBB (since 1997 called Sweco). Before the construction of Kuwait towers, Sune lindstorm, Chief architect of the company already erected five groups of his typical "mushroom" water towers, but the Amir of Kuwait wanted a more striking design for the sixth site. Lindstorm made ten different designs and three were presented to the Amir, who chose this one.

VBB has commissioned the main building task to the Energoproject of Belgrade, Yugoslavia. The towers were built in prestressed concrete and reinforced concrete. The three spheres is covered approximately by 41,000 enamelled steel discs in eight shades of green, blue and gray, recalling the tiled domes of historic Mosques. Around the spheres, the steel discs are prearranged in spiral patterns. The construction of Kuwait Towers were, together with the Kuwait Water Towers, was awarded the Aga khan award for architecture in 1980.
Restaurants in Kuwait Towers
Horizon Restaurant(Ofok Hall)

Overlooking the Arabian Gulf on a 79m above sea level, a pleasant lounging spot for visitors to enjoy a wide selection of pastries, fruits, savory snacks and beverages.