It is the symbol of Kuwaiti liberation, the representation of country’s resurgence, second tallest tower in Kuwait, and the fifth tallest telecommunication tower in the world. Officially unveiled by the late Kuwaiti Amir, Sheikh Jaber Al-Ahmad Al-Jaber Al-Sabah on 10th March 1996, this 372meter tall tower is 40 meters taller than the Eiffel Tower. 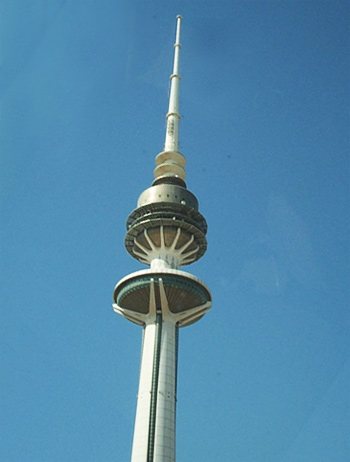 The tower is so-named following the multinational coalition that led to liberation of the nation from seven months of Iraqi occupation during the Gulf war.

The structure is made using ceramic tiles on the façade from base to first mezzanine level. Three natural light shades render a geometric design from the base. The tower, including the telecommunications complex, is divided into three working areas – a public communications center; revolving observatory level, and a restaurant at 150 meters; and the adjacent plant and equipment structure.

There are a total of 18 elevators, and are amongst the fastest in the world. As for the revolving mezzainine, there are six office floors spanning 12000 sqm above the revolving observatory level, that rise up and out within a section covered in aniodised aluminium, so as to withstand the extreme temperatures.

The tower includes a revolving restaurant and an observation platform, apart from radio and telecommunications offices.

Given the historical and monumental significance of this tower, visitors usually do not miss the opportunity to visit this destination during their travel to Kuwait.