Green Island is well known as the ideal place for relaxation. It is a popular holiday retreat of Kuwait, which is in fact, a reclaimed land, transformed into an artificial island. 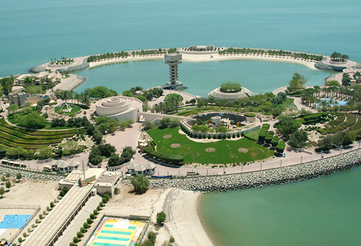 The Green Island is located along the coastline, extending from Al-Shiwaikh to Ras Alard, spanning an area of 785,000 square meters. It is surrounded by natural rocks brought from Al-Fujairah Emirates. In fact, even the sands at the beaches of the Green Island is said to have been imported from other countries. Established on 22nd February 1988, and owned by T.E.C, the island includes about 50,000 coloured shrubs and seedlings planted here, and with all the colours and greeneries, it doesn’t render the feel of being in a desert country.

On the eastern side of the island, is a swimming pool with a depth of 2.5meters to 3meters. Green Island offers a range of entertainment options including an amphitheatre with seating capacity for at least 700 people. The island also includes a 35mts tall tourist tower, with an overhead water tank. On standing atop the tower, visitors can catch a glimpse of the whole island. The tower includes a Kid’s Castle, with several rooms, corridors, channels, spiral stairway and waterfalls.

There is a restaurant on either side of the island, and a well-equipped service center. There is plenty of space and options to play games with family, including Soap-Football, inflatable bouncing castles, playground for kids, options to train ride, bicycle rent, a good walking path, and above all opportunity for an outdoor picnic meal.